My next door neighbors accused me of being a “dispensationalist!”  I then asked them if they knew what it meant, and they replied, “You take the Bible literally.” Huh?

How do they take it? They know I am from Jewish heritage and then “proclaimed to be Abraham’s offspring”, so I said, “What are you, Arabs?” They just looked at me with no clue.

Dispensation can be explained easily in these times of drug use. Legally. You go to the Doctor and he writes you a prescription, in which you take to the pharmacist. The pharmacist fills or dispenses the prescription as the doctor ordered.

I started studying the Bible deeply since I was a JW for 15 years, it made an impression which would reach out 18 years, until I became a born-again Christian.  Yeah, that’s right, a Jew to a JW, to a born-again Christian.  Consequently, I had to prove to myself the doctrines of the “trinity, Hell-Fire, Heaven for those who were NOT of the 144,000,” to name a few.

During my studies it became clear that to me that there are two dispensations:

In this blog we will deal with the dispensation given to Jesus from the Father. He was to go to the Jews and preach the coming kingdom. He performed miracles and signs as the Jews would be expecting from their King.  However, the Jewish hierarchy were expecting a “Grand King” with riches, accommodating the Pharisee’s and Sadducee’s, instead of the poor.

He taught his Apostles and disciples to preach the Kingdom. And if they believed truly, that Jesus was the “Messiah and the Son of God,” they would see the Kingdom to come. That meant that the promise foretold and preached about this earthly kingdom was all they knew at that particular time.

Jesus tried to explain the coming events regarding His death, burial and resurrection, and this is what transpired:

(Luk 18:31-34 MKJV)  And He took the Twelve and said to them, Behold, we go up to Jerusalem and all things that are written by the prophets concerning the Son of Man will be accomplished. vs. 32:    For He will be delivered to the nations and will be mocked and insulted and spat on.  vs. 33:    And they will scourge Him and put Him to death, and the third day He will rise again.  vs. 34:   And they did not understand any of these things. And this saying was hidden from them, nor did they know the things which were spoken.

It wasn’t until Pentecost, when the Holy Spirit revealed this understanding.

Jesus was focused on the Jews. It starts with the words spoken in the OT:

(Exo 19:6 MKJV)  “And you shall be to Me a kingdom of priests and a holy nation. These are the words which you shall speak to the sons of Israel.”

(1Ki 9:5 MKJV) ” then I will establish the throne of your kingdom on Israel forever, as I promised to David your father, saying, There shall not be cut off to you a man on the throne of Israel.”

(Psa 103:19 MKJV)  “Jehovah has prepared His throne in the heavens; and His kingdom rules over all.”

(Isa 9:6 MKJV)  “For to us a Child is born, to us a Son is given; and the government shall be on His shoulder; and His name shall be called Wonderful, Counselor, The mighty God, The everlasting Father, The Prince of Peace.
(Isa 9:7 MKJV)  There is no end of the increase of His government and peace on the throne of David, and on His kingdom, to order it and to establish it with judgment and with justice from now on, even forever. The zeal of Jehovah of Hosts will do this.”

(Dan 6:26 MKJV) ” I make a decree that in all the domain of my kingdom, there shall be trembling and fear before the God of Daniel. For He is the living God, and endures forever, and His kingdom is that which shall not be destroyed, and His rule shall be to the end.”

Then it follows through into the NT. “Proclaim the kingdom of God, Jesus commanded.”  You see that this covenant between God and the Israelites stands through to the end of the Bible.

(Mat 9:35 MKJV)  And Jesus went about all the cities and villages, teaching in their synagogues, and preaching the gospel of the kingdom, and healing every sickness and every disease among the people.

(Mat 16:28 MKJV)  Truly I say to you, There are some standing here who shall not taste of death until they see the Son of Man coming in His kingdom.

(Mat 25:34 MKJV)  Then the King shall say to those on His right hand, Come, blessed of My Father, inherit the kingdom prepared for you from the foundation of the world.

(Luk 1:33 MKJV)  And He shall reign over the house of Jacob forever, and of His kingdom there shall be no end.

(Luk 9:60 MKJV)  Jesus said to him, Let the dead bury their dead, but you go and proclaim the kingdom of God.

(Luk 22:30 MKJV)  that you may eat and drink at My table in My kingdom, and sit on thrones judging the twelve tribes of Israel.

(Act 8:12 MKJV)  But when they believed Philip preaching the gospel, the things concerning the kingdom of God and the name of Jesus Christ, they were baptized, both men and women.

(Act 28:23 MKJV)  And they having appointed him a day, many came to him in his lodging; to whom he expounded, testifying the kingdom of God, and persuading them the things concerning Jesus, both out of the Law of Moses and out of the Prophets, from morning until evening.

First of all , we know that Jesus came to the  Jews as their chosen Messiah. If you read carefully, the entire Bible was written for the Jews.  Remember, Jehovah took out a nation for his name, and this started with Abraham and the covenant He promised him. This still in place today and will work its way through to the “New Heavens and the New Earth, New Jerusalem.”

(Gen 12:1 MKJV)  And Jehovah said to Abram, Go out of your country, and from your kindred, and from your father’s house into a land that I will show you.
(Gen 12:2 MKJV)  And I will make you a great nation. And I will bless you and make your name great. And you shall be a blessing.

Kindly Note:  If you notice the “Nations” are included in this covenant, because God included them in this promise.

To prove the first part of the covenant, the Bible declares it when Jesus was speaking to the twelve:

(Mat 10:5 MKJV)  Jesus sent out these twelve, commanding them, saying, Do not go into the way of the nations, and do not enter into any city of the Samaritans.”

This was an important part of dispensation given to Christian Jews. To go out to the lost house of Israel only, ans stay away from the gentiles.

(Mat 15:24 MKJV)  But He answered and said, I am not sent except to the lost sheep of the house of Israel.

Jesus Himself said, “He was sent to the lost sheep of the house of Israel. You cannot change what has been written by God.

(Rev 21:1 MKJV)  And I saw a new heaven and a new earth. For the first heaven and the first earth had passed away. And the sea no longer is.

(Rev 21:5 MKJV)  And He sitting on the throne said, Behold, I make all things new. And He said to me, Write, for these words are true and faithful.

(Rev 21:10 MKJV)  And he carried me away in the Spirit to a great and high mountain and showed me that great city, the holy Jerusalem, descending out of Heaven from God,

We hear from pulpit that the book of Revelation is all symbolic, but how can that when it was foretold in the OT  as well?

Search the scriptures.  My next blog.  “The Mysteries,” will go into the second dispensation given to the Apostle Paul from the ascended Christ. 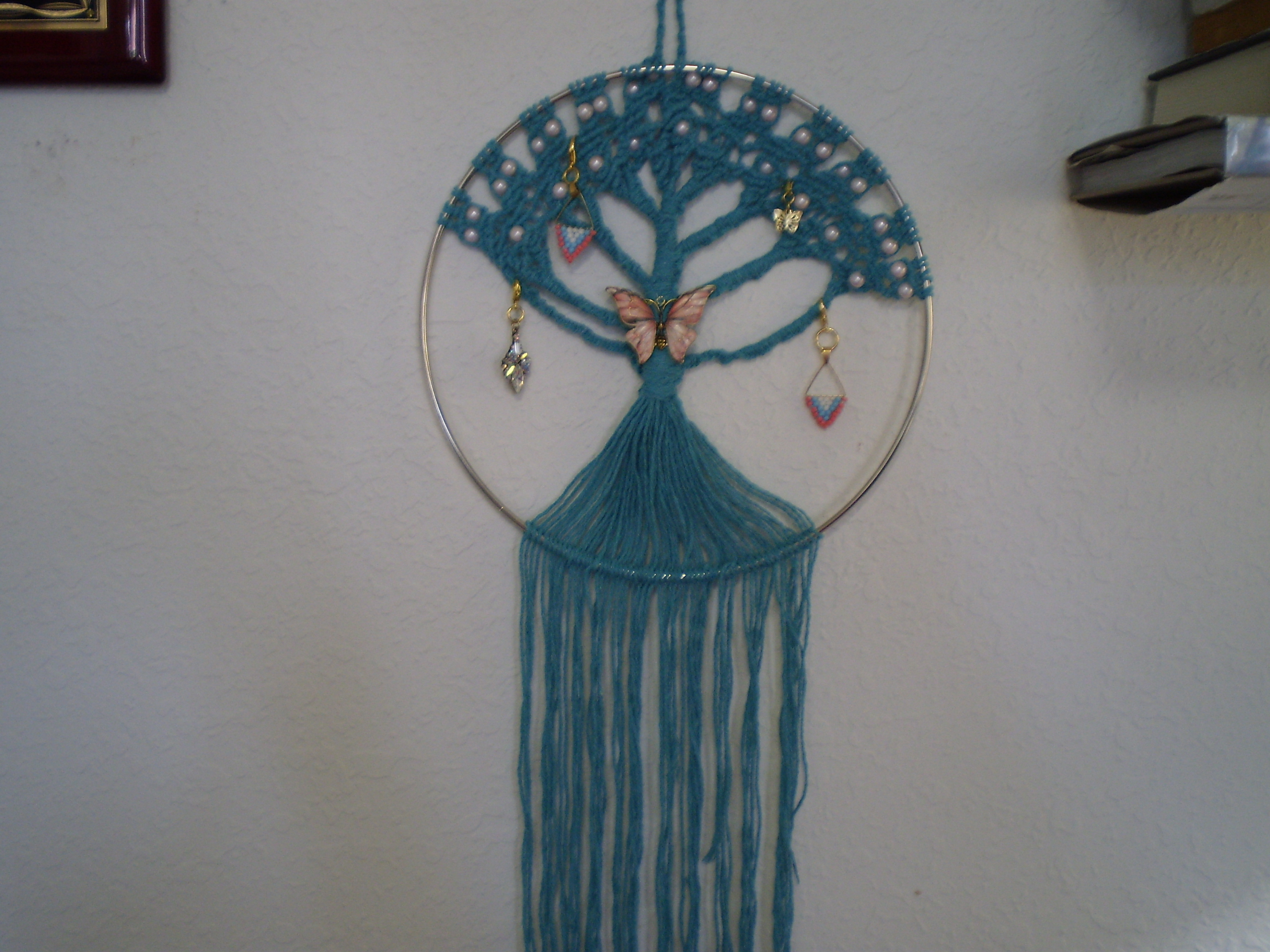 This dreamcatcher is more a delicate look, like a spider web. all are approx 9-10" in dia. and the tail is over 15" long. Shipping included. Contact me @ dsorrentino@tampabay.rr.com if you have any questions. I have about 25 different ones